The Origin of Paul's Religion 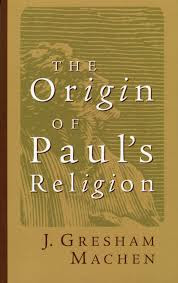 This is now available as an e-sword module. See here.

The Origin of Paul's Religion (1921) is perhaps Machen's best known scholarly work. This book was a successful attempt at critiquing the Modernist belief that Paul's religion was based mainly upon Greek philosophy and was entirely different from the religion of Jesus.
Machen writes a masterful and forthright defense of the historical truthfulness and supernaturalism of the New Testament. This volume is taken from the James Sprunt Lectures delivered at Union Theological Seminary in Virginia. Reprints of this book sometimes add the subtitle "The Classic Defense of Supernatural Christianity".
Machen refutes with the anti-supernaturalism that was beginning to dominate the church in the early decades of the twentieth century. Although written 85 years ago it remains a model of biblical scholarship and warm piety.
"In an age when the nature and content of Paul's message are once again under scrutiny, evangelical and Reformed readers will benefit immensely from a close reading of Machen's masterwork. This book is an outstanding example of careful, patient scholarship that received high praise when it was first published and continues today to demand attention." - R Scott Clark

"J Gresham Machen not only believed, practised, and proclaimed Paul's gospel, he was also able to defend its authenticity at the highest scholarly level. Because 'The Origin of Paul's Religion' penetrates to the heart of the matter it continues to speak to contemporary controversies over the nature of the gospel and the Christian faith." - Sinclair Ferguson

Amazon.com Reviews
J Gresham Machen produced an amazing response to liberal scholarship surrounding the topic of the origin of Christianity in the lectures contained in The Origin of Paul's Religion. Machen meets scholars on their level to refute mistaken notions about the origin of Christianity; he is thorough, well read, and clear in his arguments. As far as relevancy, Machen's lectures may as well have been delivered last year. Machen delivers a stirring apologetic supporting the supernatural origin of the religion of Paul, and in turn Christianity. The church will always be under attack and we must be grateful for men like J. Gresham Machen who have defended it to the end.
One of Machen's more academic works as a biblical scholar. This is a thorough treatment of Pauline theology in response to modernist biblical studies (higher criticism, comparative religion, etc.). Thesis: the "origin" of Paul's religion consists in the historical facts constituting the redemptive gospel of Jesus Christ. He refutes modernist interpretations of Paul that cast him the light of naturalistic comparatives on the one hand, and moralistic spiritualism on the other. Rather, Machen argues, through the variety of his ministry, Paul preached the revealed and properly supernatural message of Christ crucified, died, buried, resurrected and ascended for the redemption of all those who are united to Christ and his righteousness through faith. This work is significant as a defense of historic Protestantism equally as engaged in biblical scholarship as the contemporary modernists in Germany and elsewhere.

He reminds me of my stepfather who was trained as a barrister in England and served as a magistrate in Singapore. His name was Eugene D'Netto.