Notes on Notes on Galatians 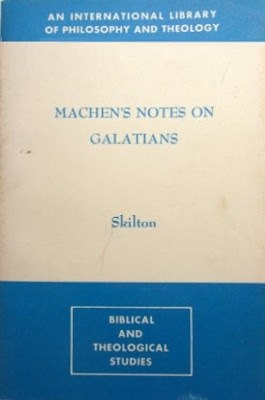 The chief feature of this volume is that it makes available in convenient form the "Notes on Biblical Exposition" which Dr. J. Gresham Machen published in the earlier 'Christianity Today' from January 1931 to February 1933. Students at Westminster Seminary have made profitable use of these Notes on Galatians 1:1 - 3:14 by following them, with minor inconveience, through bound periodical volumes; but for many others who might greatly benefit from them, they have long been inaccessible.
Here you will find a master exegete opening up important and essential meterial to help undertsand the import of the great Apoostle on this vital portion of Scripture.
"Notes on Galatians is one of the hidden jewels of J Gresham Machen's outstanding contributions to Christian literature. As Galatians has again become a battleground for theological controversy over the nature of the gospel, Dr Machen's exegetical insight and theological sturdiness provide wise and careful guidance for a new generation of Bible students. Written for a previous generation it continues to speak to the contemporary one." - Dr. Sinclair Ferguson"
"Dr. Machen was a master at crystal clear teaching and his work on Galatians is a good model of this gift. In a day of confused and confusing teaching on this Book, Dr. Machen reminds us of the dynamic power of this Gospel of justification by faith alone in Christ alone that is opened so richly by the Apostle Paul." - Pastor Bill Shishko
"Machen wrote on Galatians to inform his students and to help Sunday School teachers. It is written with delightful clarity and incidentally introduces us to what Machen did very well, teach the New Testament to students at Princeton and Westminster Seminaries. It is wonderfully lucid; a pleasure to read; a model for anyone who preaches the Bible." - Geoff Thomas"
"This is Machen at his best, and surely begs to be re-printed. Especially the introductory chapters are needed nowadays." - Pastor Tom Lyon"
"J. Gresham Machen is perhaps best known for his defense of Christianity and especially for his articulate advocacy of confessional Reformed theology. By training, however, he was a New Testament scholar and by practice he was a biblical exegete of the first order. This little work on Galatians is still useful as a witness to Machen's clear-headed insight into the nature and message of Paul's letter to the Galatians. This witness seems particularly relevant in the midst of the current confusion surrounding Paul and the doctrine of justification." - Dr. R. Scott Clark
The late John H. Skilton did a great service to the church by getting this material from various places and putting it all conveniently in one place.
W H Chellis has written here
In reading through J. Gresham Machen’s Notes on Galatians, I found this interesting quote. It first appeared in Christianity Today in January 1931. Machen died in 1937. I assume this comment is a product of Machen’s more mature thought:

“In the second place, Christians should by no means adopt a negative attitude toward art, government, science, literature, and other achievements of mankind, but should consecrate these things to the service of God. The separateness of the Christian man from the world is not to be manifested, as so many seem to think that it should be manifested, by the presentation to God of only an impoverished man; but it is to be manifested by the presentation to God of all man’s God-given powers developed to the full. That is the higher Christian humanism, a humanism based not upon human pride but upon the solid foundation of the grace of God.”
(p 33)
Another good quote is this one
“The faith that James is condemning is not the faith that Paul is commending.”