In a footnote in his essay on How Scotland lost its hold of the Bible (see here) Iain Murray says
Christianity and Liberalism (repr. 1997, Grand Rapids: Eerdmans), p. 178. This has to remain one of the most important books of all times.
This refers to Machen's statement about Liberalism that is is ‘a movement which is anti-Christian to the core.’ (He also quotes Machen saying ‘There is sometimes a salutary lack of logic which prevents the whole of a man’s faith being destroyed when he has given up a part.')
Earlier in the body of the essay Murray says
In 1933, through the Presbytery of New Brunswick, J. Gresham Machen appealed to the General Assembly of the Presbyterian Church of the USA, that the personnel of their Foreign Missions Board should only contain men who held to ‘the full trustworthiness of Scripture’. To support the appeal, Machen produced a publication of 110 pages, which gave evidence of the extent to which unbelief was being tolerated and promoted on the mission field. He showed that the ‘inclusivist policy’, which was being allowed in the churches at home, was proving a disaster in China where some church leaders had come to deny the bodily resurrection of Christ. He cited the literature of liberals then being published in Chinese. In one of these books, the author spoke of how a mother was reading part of the Old Testament where the destruction of the Amalekites is commanded. The mother sought to explain the judgment to her daughter by saying ‘that revelation was progressive, and now in Jesus we were told to love our enemies and to do good to them that despitefully use us. The little girl thought for a moment and then her face lighted up and she said, “Now I understand … this back here was before God was a Christian.” (Modernism and the Board of Foreign Missions of the Presbyterian Church in the USA, J. G. Machen (privately published, 1933), pp. 74-5.)
Despite all that Machen wrote and said, the General Assembly gave the personnel of the Board of Foreign Missions ‘whole-hearted’ support. The inclusivist policy was upheld. When Machen and others then formed an Independent Mission Board, the General Assembly ordered it to be disbanded and forbade any of its church to be members. Machen did not obey the direction, upon which, he was tried, not allowed to question the legitimacy of the Assembly’s order, found guilty, and suspended from the ministry.
The so-called inclusivist policy was in reality an anti-biblical policy. Machen had quoted teachers in China who expressed the hope that modernists and not fundamentalists would come to that mission field. The likes of Machen would not be welcome; and now he was not to be welcomed in the church which he had served all his life.
No comments: 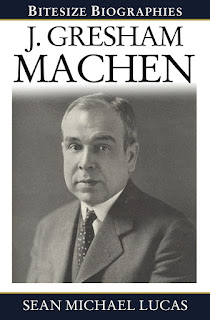 £6.99
US Price $10.99
Bitesize Biography
Author Sean Michael Lucas
ISBN 9781783970575
Pages 130
Dubbed at his death "Doctor Fundamentalis," J. Gresham Machen (1881-1937) was one of the most significant defenders of evangelical Christianity in the early twentieth century. Raised in American Presbyterianism, he wrestled deeply with the challenge of Protestant Modernism and provided some of the most significant responses to it, particularly his classic book Christianity and Liberalism. He pointed the way forward toward a Christianity that was both intellectually rigorous and spiritually satisfying, one that was rooted in a trustworthy Bible and in a confessional tradition which in turn produced a genuine faith in Christ. As a result, Machen continues to provide lessons today for those who desire to be valiant for truth in the midst of a hostile world.
In the battle against vital doctrinal declension in the early 20th century, Gresham Machen played a very significant role in defending classic Christian orthodoxy. But it is a role few are acquainted with since biographies of him have been scarce and hard to obtain. This new study of his life is therefore welcome indeed. Highly recommended.
Dr. Michael Haykin, Professor of Church History and Biblical Spirituality and Director of The Andrew Fuller Center for Baptist Studies at The Southern Baptist Theological Seminary
Sean Michael Lucas (Ph.D., Westminster Theological Seminary) is senior minister at the First Presbyterian Church, Hattiesburg, Mississippi, USA, and associate professor of church history at Reformed Theological Seminary, Jackson, Mississippi, USA. He is the author of several books, including Robert Lewis Dabney: A Southern Presbyterian Life and For a Continuing Church: The Roots of the Presbyterian Church in America.