Check here for a preface to Christainity and Liberalism by Vern Poythress
2 comments:


One of the many thousands who felt indebted to Warfield was Dr J. Gresham Machen. Of all the teachers at Princeton it was he who left the deepest and most lasting impression on Machen. This influence was not felt so much as a student nor in Machen’s early years as an Instructor in the Seminary. Evidence of it can indeed be seen as early as 1909, the year of the 400th anniversary celebration of Calvin’s birth. Machen wrote to his mother of Warfield’s address on ‘The Theology of John Calvin’ as ‘the feature’ of the Celebration at Princeton. In this address Warfield spoke of the vision of God in His Majesty as ‘lying at the foundation of the entirety of Calvinistic thinking’. It was through Warfield that Machen came to see that a broadly based evangelicalism was not enough — it was the full-orbed Reformed faith which alone was consistent Biblical Christianity and consistent evangelicalism.

Warfield saw the drift which had set in at Princeton — the drift which was eventually to destroy the witness of the Seminary which had stood for over a century as a bastion of the faith. Dr Machen tells of an extra­ordinary conversation which he had with Warfield shortly before the latter’s death: ‘In the course of the conversation I expressed my hope that to end the present intolerable condition there might be a great split in the Church, in order to separate the Christians from the anti-Christian propagandists. “No”, he said, “you can’t split rotten wood”.’ He had small hope for the major denominations of the time. (Stonehouse’s Biography of Machen, p. 310).
2 comments:

See something on this here
2 comments:

Dicussion has recently arisen following the quotation of extracts from a letter written to his mother in 1913 which apparently reveals racism on Machen's part. The extract can be found here.
2 comments:

You can hear an audio introduction to Machen by Robert Godfrey here at Renew Your Mind.
2 comments:

A brief history of the seminary founded by Machen can be found here.
2 comments: 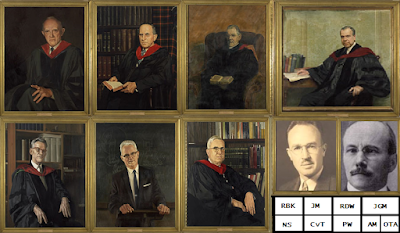 Machen and the founding faculty in the common room 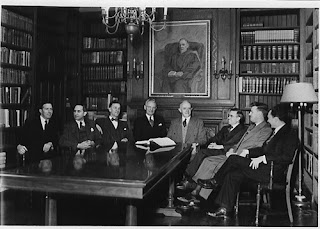 In a footnote in his essay on How Scotland lost its hold of the Bible (see here) Iain Murray says
Christianity and Liberalism (repr. 1997, Grand Rapids: Eerdmans), p. 178. This has to remain one of the most important books of all times.
This refers to Machen's statement about Liberalism that is is ‘a movement which is anti-Christian to the core.’ (He also quotes Machen saying ‘There is sometimes a salutary lack of logic which prevents the whole of a man’s faith being destroyed when he has given up a part.')
Earlier in the body of the essay Murray says
In 1933, through the Presbytery of New Brunswick, J. Gresham Machen appealed to the General Assembly of the Presbyterian Church of the USA, that the personnel of their Foreign Missions Board should only contain men who held to ‘the full trustworthiness of Scripture’. To support the appeal, Machen produced a publication of 110 pages, which gave evidence of the extent to which unbelief was being tolerated and promoted on the mission field. He showed that the ‘inclusivist policy’, which was being allowed in the churches at home, was proving a disaster in China where some church leaders had come to deny the bodily resurrection of Christ. He cited the literature of liberals then being published in Chinese. In one of these books, the author spoke of how a mother was reading part of the Old Testament where the destruction of the Amalekites is commanded. The mother sought to explain the judgment to her daughter by saying ‘that revelation was progressive, and now in Jesus we were told to love our enemies and to do good to them that despitefully use us. The little girl thought for a moment and then her face lighted up and she said, “Now I understand … this back here was before God was a Christian.” (Modernism and the Board of Foreign Missions of the Presbyterian Church in the USA, J. G. Machen (privately published, 1933), pp. 74-5.)
Despite all that Machen wrote and said, the General Assembly gave the personnel of the Board of Foreign Missions ‘whole-hearted’ support. The inclusivist policy was upheld. When Machen and others then formed an Independent Mission Board, the General Assembly ordered it to be disbanded and forbade any of its church to be members. Machen did not obey the direction, upon which, he was tried, not allowed to question the legitimacy of the Assembly’s order, found guilty, and suspended from the ministry.
The so-called inclusivist policy was in reality an anti-biblical policy. Machen had quoted teachers in China who expressed the hope that modernists and not fundamentalists would come to that mission field. The likes of Machen would not be welcome; and now he was not to be welcomed in the church which he had served all his life.
2 comments: